When I was young one of my earliest PC gaming memories was entering a competition to win a new game that had just been released. The premise was awesome; design and run your own hospital, but an environment laced with humour. I didn’t win a copy of Theme Hospital, but I still got it as a birthday present or similar. This left me with two long standing memories, the fun of playing the game and the knowledge that I never completed it. As technology moved on I would occasionally pop back and play it on my subsequent PCs until the time that it would no longer install let alone run. There the dream would have died were it not for my girlfriend and Corsix. 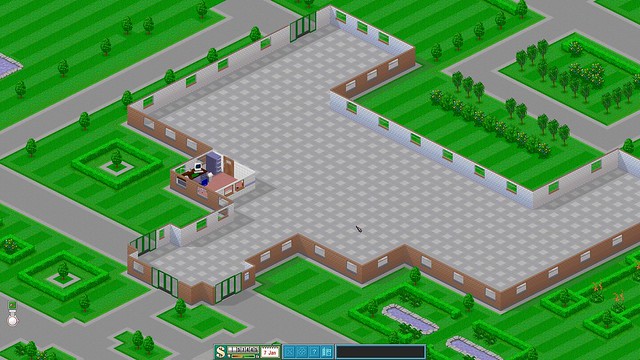 Just like the real NHS you can try to make the working conditions as crampt as possible.

Having finally completed Tropico 5 we were looking for our next game to play together and discuss whether layout or functionality were more important (seriously not everyone needs to live in a posh house!). I had recently found my old Theme Hospital disc and we had lamented the fact that it would no longer run, so I decided to explore CorsixTH which I had heard would allow me to run Theme Hospital on a modern system. After a relatively simple install we were ready to face vomit waves, VIP visits and to be reminded that ‘patients are not to die in the corridors!’

The first level eased us back in quite nicely, curing a few people of the squits before they redecorated the carpet and reminding us that all the staff needing a break at the same time is a bad thing. I had forgotten some of the interesting diseases that your patients could come in with and was pleased to see someone in full Elvis get-up ready to be cured of the King Complex.

From these humbled beginnings our hospital management skills have flourished as we have needed to build research departments, operating theatres and training rooms. We have dealt with outbreaks of heaped piles, slack tongue and bloaty head. We have laughed at the brilliant cures for some of the diseases (the popping and re-inflation of a bloaty head being a particular highlight!). This game is everything we remembered it to be and we are well on the road to completing it. 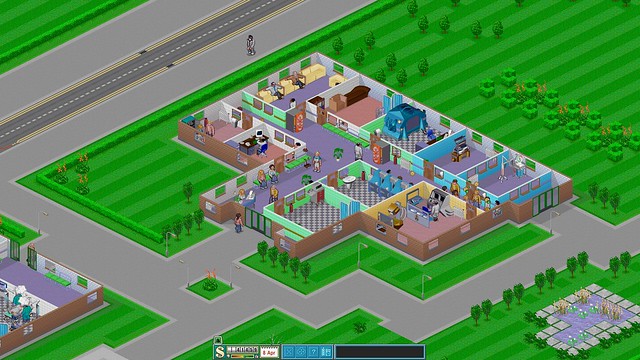 I spot a King Complex sufferer!


That being said the game has obviously aged (being near 20 years old!) and the Corsix mod has had to make some sacrifices (the loading screens are all gone and there are no rats at present). Also for all it’s fun there often comes a point in the level where you have met all the objectives except numbers of patients cured. This results in setting the game to its fastest speed and waiting for the number of cures to be reached. That being said, the process of reaching this point more than makes up for the eventual wait.

If you are interested in trying this out the game can be bought from Good Old Games and the Corsix mod can be found here. In the mean time I have to sort out an incoming slack tongue emergency!
Posted by Jameslikesgames at 08:19 No comments:

Beyond Earth: It’s Civ Jim, but not as we know it!


I bought Civilisation: Beyond Earth on Friday and it was with great excitement that I started my first game. The prospect of living in harmony with the planet and sending siege worms after my enemies in the forefront of my mind. From the screenshots I had seen it looked enough like the other Civilisation games that I felt comfortable enough to dive straight in. A few hours later I emerged somewhat lost, on the verge of losing and feeling rather great about it!

I have played the civilisation series since it’s first iteration and had fallen in to a something of a pro-forma approach to the game. I would pursue the technological victory and knew the must-have wonders and techs from a relatively linear tech tree. In keeping at the front of the technological curve I usually had enough of an advantage that my small high-tech force could hold other civs at bay while I completed my spaceship.

After finishing that first (impulse) game I realised that I needed to go back to basics and learn how this game worked. For starters could no longer rely upon a linear tech-tree, neatly divided up in to ages. In addition I have never heard of any of these future technologies or building (yes, I admit it makes sense!) and therefore had very little idea of what I actually needed in order to maximise my science output! This meant a greater reliance on the in-game advisors who, while good at recommending techs, do not really explain what their end goal is. 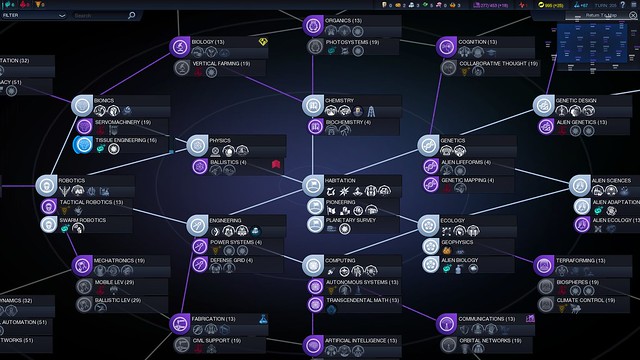 I also had to get to grips with this idea of affinity (what type of ideology would I follow on this new land) and I had decided that living in harmony with the planet was for me. Therefore I pursued anything that had a harmony symbol on it. While I did gain some great harmony perks, this left me vulnerable later in the game as I had ignored other techs because they were labelled as supremacy or purity. Little did I realise the use of the ‘a little of column A, a little from column B’ approach. There is something to be said for explorers that can build extra expeditions (gained at supremacy level 1) and also were not attacked by aliens (purity level 1)! 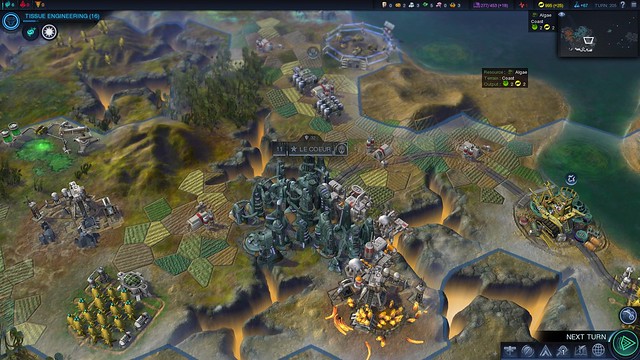 The big benefit of the Harmony affinity is the lovely green hue your buildings have.

Again with the move away from linear tech progression I found myself having to re-learn unit progression. I could not rely on my knowledge that machine-guns are (generally) better than cross bows. I need to have a look at unit stats and factors in for the fact that some units upgrade as you increase levels in your dominant affinity, meaning that your early game combat units can become your late game power-houses.

I am still smiling now as I contemplate my approach to my next game, knowing full well that I really need to read the manual/examine the tech web. With all that said it’s just too much fun to get halfway through a game, realise you have missed something critical and then spend the rest of it trying to find a coping strategy.

If you are intrigued you can pick up Civilisation: Beyond Earth on Steam for around £30. As for me I am going to swap harmonising with the planet for turning my folks in to robots, what could possibly go wrong?
Posted by Jameslikesgames at 15:49 No comments: